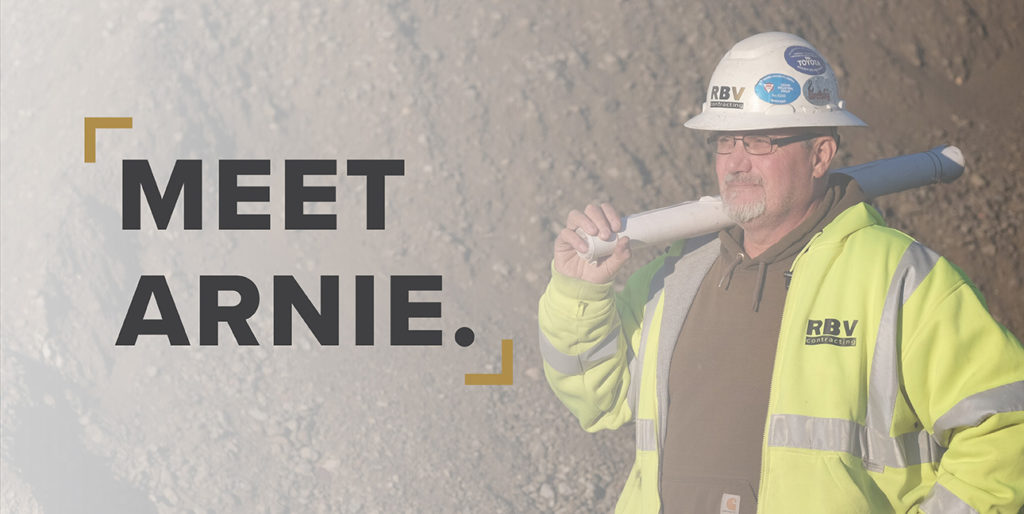 Arnie Ridner has been a solid fixture of RBV since the very beginning. As RBV Contracting’s Operations Manager, Arnie has his hands in all aspects of the company but has a passion for growing the next generation of the labor force and working in the trenches with his team.

What were you doing before RBV?

Arnie started in the construction world in 1982 when he graduated from High School. He’d been doing the work even before that, he says, back when he was just a lad. His first job after high school was in excavating and sewer work which sounds dirty, but Arnie didn’t mind. “I like it. I wouldn’t have it any other way. I like getting dirty and muddy.”

How did you join RBV?

Arnie has been with RBV since the very beginning. His history with Jim and Rudy runs deeps and before he worked with them he worked with both of their fathers. When Arnie heard Rudy talking about starting his own minority-owned contracting business, Arnie knew he wanted to be involved. “I knew it would happen and that somehow I would be a part of it. So, I asked to get involved right then.”

Arnie wore many hats when RBV Contracting first started, and he knew that Jim and Rudy were worried they couldn’t provide what he had been used to in previous positions, but, Arnie says, “We all knew we had to sacrifice to make a better company.”

How has your role changed as the company has?

Arnie started at RBV as a foreman of a three-man crew. After about a year, the team expanded and Arnie was placed in a leadership role as RBV’s General Superintendent. Today, Arnie is the Operations Manager and is involved in activity both in the field and in the office. Even though he enjoys both, his real passion is being out in the field. “I like to stay connected to the job and my guys as much as possible.”

Arnie says it’s important to him that his guys know that their leadership team knows how hard it is to be out in the field. “The men don’t want to hear, ‘I’ve been there before,’” says Arnie. So he gets out there with them. “I’m still one of them. Heart-wise, I’m with them all the time.”

You’re involved in training, what’s one piece of advice you find yourself giving every day?

“I’m always squawking at them about learning something,” says Arnie. But the main thing Arnie tries to impress on his crew is to take care of their bodies. “Everyone laughs,” he says, “but it’s a long, rough career if you think about the toll it takes on you for over 30 years. It’s hard to endure this type of work and once you’re worn out, you’re in trouble.”

He also encourages his team to ask a lot of questions and stresses that each question is important. “If they need to ask it, it’s important to them. If you downgrade or beat them up for it, they’re not gonna ask.” He wants to build an atmosphere of leaders, not fear. “Leaders build leaders. I have to tell the old guys that you can’t yell at the young guys and then not teach them how to improve. We won’t get people that want to come into the business if we treat them poorly.”

How is the industry different for those entering than when you started?

This attitude is something that Arnie says has changed since he started. “When I started, it was a lot of ‘shut up and watch what I do.’ There wasn’t a lot of instruction. But I got to where I am today by asking questions, and I want my guys to do that too.”

Arnie feels there is a lot at stake when it comes to creating an environment where people want to be: “We have a hard enough time to fill the labor gap, so we need to take a different approach with our existing crew members. They need experience and we gotta give them that experience. We need to make our crew marketable because we are running out of people to fill our positions.”

Rather than repeat the conditions he came up in, Arnie wants to treat crew members good, answer their questions, and give them the working conditions he didn’t have.

How do you see RBV changing as technology and the industry changes?

“We’ve embraced technology and am proud of RBV’s ownership for doing that.” RBV started with laptops in the field for the foreman and Arnie says it makes their lives much easier. They get all the information they need and send us what we need.

The biggest technology advancement though, says Arnie, was adding GPS to their equipment. “It’s probably the biggest advancement you can make in this industry. It saves money in the long run because you don’t need staking or a lot of survey work. It’s helped us get jobs. It’s a big part of what customers are looking for now.”

You guys are very invested in Detroit? What do you hope for Detroit in the future?

“I’d like to see [Detroit] continue to grow and see the growth spread outside of the downtown area. I hope to expand on that work next.”

In your opinion, what sets RBV apart?

Arnie says RBV stands out in the way they treat their customers and their employees.

“We are customer-driven. I remind everyone that we really invest in our jobs and our clientele. I preach that from top to bottom. All our guys know it. If we don’t have our clientele, we are nobody. We try to accommodate clients, make sure they’re taken of, on time, and on budget.”

He adds, “Every person in this company adds value to it and we have a real family environment. Everyone’s job is equally important and that’s what sets me apart, I see these guys as family. We’ve got to be a functioning group in order to succeed.” Those guys that feel like his family are also his favorite part about coming to work. “We share a lot of laughs. I like being around the guys and the fellowship we share.”